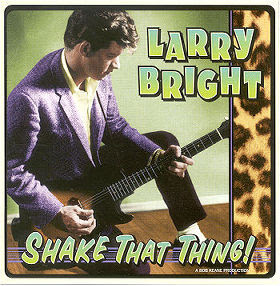 Review by Thomas Schulte
" Del-Fi gives listeners, on one CD, sides from nearly half of Larry Bright's entire discography of singles. Five other non-released tracks are included. The sum is proof that voodoo-loving Bright was a talented and dynamic guitarist and vocalist. It would be a shame to see him forgotten in this era of CD revisitations. Listening to this collection, it is no surprise that Bright first charted at number one on the black music chart in 1960. The Texan-born musician soaked up the "chitlin circuit" sounds of the time and let their power shape his own style. Listen to him work through "Bacon Fat," "Maybelline," and "New Orleans." Apparently, one of the many strikes against this hard-drinking, superstitious performer was his own lack of confidence in covering songs. Nothing but surety and competence comes across on these tracks, though. His inspirations are apparent in his original material, too. Listen to "When I Did the Mashed Potatoes With You"; it is all about the Drifters' "Save the Last Dance for Me." Bright caught the shining sparks from the magic sounds of his day, and his music still works wonders. The effect was immediate. Many tracks are jumping with sax. This sounds like Wrecking Crew great Plas Johnson. The entire Bright story is told in Del-Fi's ten-page booklet. While his history is in the text, the compiled tracks are an exciting slice through the beginnings of rock & roll. His monkey paw may never have brought him wide fame and fortune, but his rockers are more than most guitar hands can conjure. "