The Immortal Lee County Killers "The Essential Fucked Up Blues" 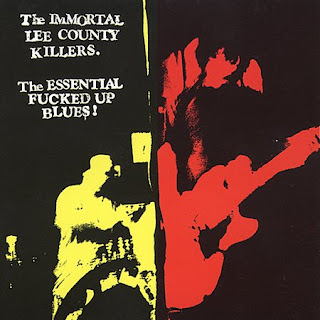 From Lee County, Alabama comes a brand new and damned real punk blues record with hidden charms; THE ESSENTIAL FUCKED UP BLUES, by The Immortal Lee County Killers (ILCK). Two important ideological facts, the band claims kin to the Revolution's Culpeper Minute Men and are avid NASCAR fans. The duo, Chet "the Cheetah" Weise and The Boss Sherrard, cut their teeth on the southern punk rock biscuit. The Cheetah founded the Quadrajets, and The Boss played in Mobile's Sphamm. Both bands established themselves in the region's lore. After spending many moons rehearsin', catfishin', studying books, the ILCK present their first ESTRUS full length. From the opening of "Let's Get Killed" to the nine minute rework of Muddy Waters' "Rollin' Stone", it's evident the cross-eyed Hell-possums found the two boys trail; and the ILCK made their desperate stand.

Liberty or Death! No Restrictor Plates! The ILCK challenge established institutions. Stripped to bare guitar, two drums, and the fringe of delta blues, The Killers' offer an uncompromised statement. The duo recorded the mess in a small condemned shack with an 8-track and a six-pack. NO "INDUSTRY" TRESPASSERS OF TRANSGRESSORS ALLOWED. The label encouraged it. It shouldn't be any other way. Transgressors and trespassers turned blues into an institution of receding-hair-line-with pony-tail-attached gruel. ILCK and Estrus turn it into the beverage of bootleggers and Baptists--white lightning; pure grain alcohol aged in a soul-still mixed with bitterness. With more tube amplifiers (three of em) than members, the duo shakes the foundations of punk rock holes, houses, and juke joints. The music evokes the gods, Hound Dog Taylor, Jerry Lee Lewis (the original killer, and the band's namesake), Blue Cheer, the MC5, and the improvisation of fellow Alabamian spaceman Sun Ra. Can you imagine fire in zero gravity? Just ask the New Bomb Turks, Hellacopters, Nomads, Man or Astroman?, these bands have witnessed the duo's distorto fueled departure and re-entry into and out of THE ESSENTIAL FUCKED UP BLUES.