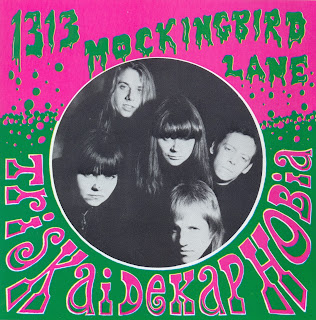 "1313 Mockingbird Lane, an American garage rock band whose name was inspired by The Munsters TV Mansion address, was formed in the late 80's in Albany, NY and prominently featured in Timothy Gassen's definitive book on The Garage and Psychedelic Music Explosion,1980-1995 titled: The Knights Of Fuzz. Out of thousands of groups in the book, Gassen listed the band among such heavyweight garage acts as The Chesterfield Kings, The Lyres and Flamin Groovies in the all time Hot 100 list. The original line up featured Haunted Hausmann (Guitar, Vocals), Kim (Organ), Robin Graves (Bass, Vocals), and Steve E. Luv (Drums). A debut single was produced on Scarab Records 1989 and titled "Hornets Nest b/w My Hearse Is Double Parked". This initial single provided a showcase of super fuzzed guitar and bass, frantic farfisa and drums with equally scary and ghoulish vocal deliveries. The prominent lyrical themes of gloom and doom presented by the band were combined with a healthy dose of tongue in cheek humor not unlike any of the ridiculous scenarios presented by their television heroes The Munsters.

Drummer Steve E. Luv quickly departed and was replaced by former Link Wray Live In '85 drummer Marty Feier. The band's second release: The Second Coming Of 1313 Mockingbird Lane 4 song EP (Scarab Records 1989) was voted by both The Schenectady Gazette and Albany NY's Metroland Magazine as one of the "top local recordings of 1989" and was distributed internationally. This garnered some popularity for the group as far away as Sydney, Australia. Shortly after the release of their first four song EP, the band signed with Sundazed Records. Sundazed Records has been instrumental in releasing rare and unreleased tracks by scores of 60's garage greats such as The Knickerbockers and The Trashmen in addition to producing high quality vinyl pressings from The Monkees catalog. The band's first full length LP: Have Hearse Will Travel was released in 1990 and was also distributed internationally. This slime green slab of wax continues to be sought out by garage rock collectors around the globe. The liner notes for this 13 song LP were written by Blotto (Band) Lead Singer Sergeant Blotto. One track from this rare LP, "Dig Her Up" , appeared again almost a decade later on the Cacophone Records Compilation titled: Ultra Swank:: Cacophone Sound Action Sampler

From this point on, the band line up changed more drastically with the eventual departure of both bassist Robin Graves and drummer Marty Feier. Robin Graves hung on for two more singles: "Monkey Cage Girl b/w Pretty Boys" (Scarab 1991) and "Psychedelic Monster b/w Dead Mary" (Scarab 1991). Organist Kim has been noted as saying that the group has gone through more drummers than Spinal Tap (Band). Drummer Marty Feier departed the band for a full time touring gig in The Cast Of Beatlemania which starred members of the Broadway show Beatlemania and was replaced by Krusty (Rusty Nales), possibly inspiring the anti Beatles tirade "I Don't Want To Hold Your Hand" which appeared on the follow up CD Triskaidekaphobia (Midnight Records 1993). Krusty was replaced by drummer OP who performed with new guitarist Johnny Wray on the next single "Slow Death b/w Dirty Bitch" (Scarab 1993) and Froot Boots EP (Scarab 1993). Op stayed on for the bands signing to Midnight Records which produced their first CD only release Triskaidekaphobia. Midnight Records is notable for signing and producing a myriad of varied vinyl and CD titles that range from releases by popular American garage rock groups such as The Fuzztones, The Outta Place and The Vipers to titles by R&B and Rock and Roll legend Screamin' Jay Hawkins.

Making money on the internet is easy in the hush-hush world of [URL=http://www.www.blackhatmoneymaker.com]blackhat forums[/URL], It's not a big surprise if you haven’t heard of it before. Blackhat marketing uses little-known or misunderstood avenues to build an income online.

Email Marketing
verry hanyd, thanx a lkt for this article .. This was exactly what I was looking for.