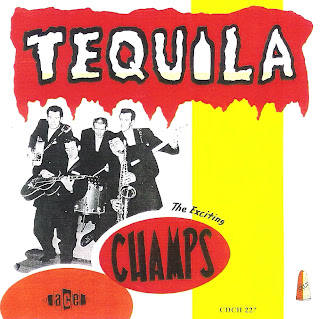 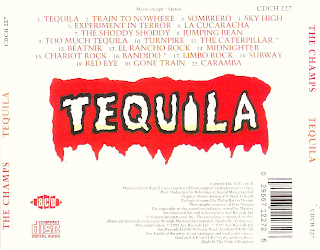 The Champs were West Coast sessionmen whose first single, the instrumental "Tequila" stayed on the charts nineteen weeks, reached number one, sold more than six million records worldwide, and won a Grammy for best R&B record of 1958.
The year 1958 saw a dramatic increase in short-lived fad rock and roll instrumental combos. Not that Rock and roll instrumentals hadn't been around before or that they wouldn't be around later. It was just that the floodgates opened wide in 1958. A year earlier, the biggest selling instrumental was "Raunchy" by it's co-composer Bill Justis. By the end of 1959, there was Santo and Johnny, Johnny and the Hurricanes, Dave "Baby" Cortez, Duane Eddy, the Fireballs, the Virtues, the Wailers, Link Wray and His Ray Men, the Royaltones, the Rock-A-Teens, Sandy Nelson, Cozy Cole and Preston Epps. However the group that really created the demand was the Champs.
Publicado por Mr. Trashe en 17:53