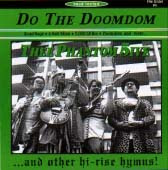 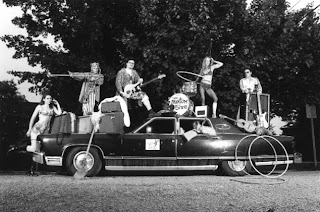 On a particular unremarkable day in Nashville, TN, Thee Phantom 5ive were rehearsing in an abandoned school bus when a tornado came crashing by, thus sucking the battered bus into its hellish funnel. Moments later, the bus was spat out onto a barren field with all members deliriously unconscious. During the minutes of unconsciousness, the band was visited by the spirits of former surf pioneers where the message was given to "go forth and procreate." No. That's not right. They said "go forth and create spine-tingling surf music."
Hence, in a dimension near you comes Thee Phantom 5ive made up of four guys on a mission to corrupt the cochleae of the earth. Forming sometime around 1992-ish (there was a bit of debate on what actually constituted a cohesive-formed band) a warped sense of surf music was born out of said abandoned, and now tornado-strickened school bus with the blessings of immortal spirits.
Pumped up on massive amounts of reverb, the group has brought forth five 7" EPs, contributed tracks to numerous compilations including tribute albums to Dick Dale, The Trashmen and Link Wray. They have performed with The Cramps, Link Wray, The Woggles, Southern Culture on the Skids, Man Or Astroman?, Morphine, Sonny Burgess and many more.
Thee Phantom 5ive's most recent offering is their debut full length CD title "Do The Doomdom ...and other hi-rise hymns" on Misprint Records. It's the follow-up to the "Road Rage" 7" on Misprint Records released in 1998 which garnered much attention. The Continental said about the music, "These guys may not know how to speak, but man do they know how to play a mean rawk n' roll instrumental!" In the meantime, the band continues to fry up hard-edged spy surf guaranteed to leave a welp the size of Texas on your cranium.
1. Road Rage 2. Cincinnati Rag 3. 4-Bolt Main 4. 2,000 lb. Bee 5. Nuages 6. Banzai Pipeline 7. Hypoxia 8. DoomDom 9. Surf Softly 10. Cuban Getaway 11. Randy Lynn Rag 12. Buey 5 13. Ginza Lights 14. Crash 15. Show Stoppah 16. Jeopardized
Publicado por Mr. Trashe en 19:02