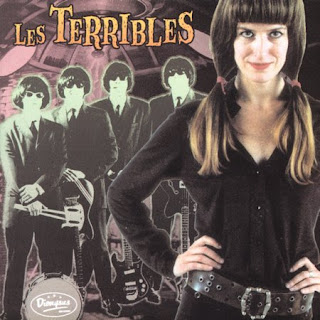 Les Terribles are the great French sixties rock band that should have existed but never did. Owing to cultural impediments and lame business practices, there were very few outstanding French rockers from that period. Ronnie Bird, Larry Greco, and a dozen others you’ve never heard of: Les Terribles cover them all, and every song makes you want to dance. The band rounds out their set with some originals, as well as their own French versions of some great foreign songs that never got « adapted » before, all done with a perfect ear for the style. A charming and talented « chanteuse », a hard-working « orchestre », and a groove that gets the dance floor moving to the Swim, the Jerk, and the Hully-Gully…Les Terribles are « sur scène » !
Jon Dragueur
Publicado por Mr. Trashe en 12:58