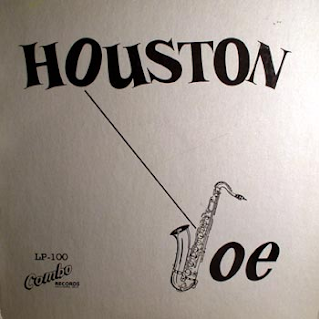 Wild Man of the tenor sax. That sums it up for this great saxophonist from Texas. There are a bunch of really great ones: Big Jay McNeely, Sil Austin, Red Prysock, Earl Bostic. But for some reason Joe Houston is my favorite. Maybe it was the first time I heard "All Night Long",or maybe it was any number of records before or after, that made me think he could honk with the best of them. He made a ton of records and there is just a small sampling of them on this page. A good but still incomplete selection of his LP's are the highlight below, but collecting the complete catalog of Joe Houston vinyl might take a room addition to the house!

Record review:
Although this is his first LP,the original issue had a full color picture of Joe on the front with song titles.The colorful purple Combo LP label is pictured to the right. The original issue was 1955, this from 1956.When the trend toward boppin' and the expression "Teenager" barged into the field of music, JOE HOUSTON was there wating with every ingredient necessary to fulfill its needs. Five years prior to the craze of Rock & Roll. Joe Houston barnstormed the country with his small group of musicians and his tenor sax blowing his way to a vast teenage followin' at the tail end of fabulous 40's on through the "Flipant 50's".
His versatility as a musician, and his fire for the rhythms of the younger swet has added his name into the musical hall of fame with the Paul Whitemans of the 20's, Benny Goodman and Artie Shaw of the 30's, and Charlie Barnets and the Stan Kentons of the early 40's.

COMBO RECORDS here now presents for the record, one of the greatest exponents of the modern day music. With the competition as it is in his time, Joe Houston has barnstormed his way into the top drawer, and here he will stay. As Long as there times, as long as the musical expressions of America have pursued the lines of Rock & Roll, as long as Joe Houston was available at the beginning with what was wanted, this album is a valueable asset to the collection of Musical America.
Others have tried to immitate him and his fire, they
Publicado por Mr. Trashe en 17:46