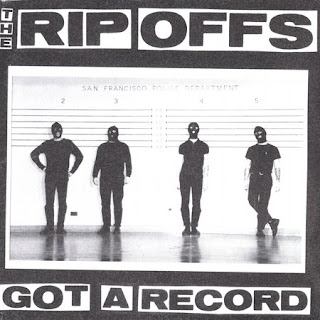 Not long ago, I began to hear punk music, and lots of people told me that punk was only great in the late '70s and early '80s. And I agreed. The current punk bands i had heard then were the Casualties, Unseen, Total Chaos, and a bunch of other bad bands of that style. Some years later, I was talkin' with an Italian guy about Killed By Death type music, and he told me about the Japanese movement - specifically the Registrators and Teengenerate. So I checked out those two bands, and I loved them. I still listen to both bands a lot, and I have already done a small article about the Registrators for my Spanish e-zine.

Along with those two bands, I also discovered the Rip Offs. All three bands showed me that punk music was still a good thing - that you can be a fuckin' good band without knowing how to play, just knowing how to ROCK. And every fan that has heard lots of music should know how to do that. I learned that from hearing the Rip Offs and Supercharger - but especially the Rip Offs because I like them more. They didn't have much talent, and they probably knew it. But they knew very well how to write funny and catchy songs. This band, along with Teengenerate, changed my concept about punk music. Inspired by those bands, I decided to start a band and play music of my own.

I think with that introduction, you should know who my two favorite bands of all-time are. If the Rip Offs and Teengenerate aren't my two favorites, they are close. Along with first-album era Who, they are probably my most listened-to bands ever. But The Who were very good musicians and didn't inspire me to play music. On the other hand, the music of the Rip Offs sounds very lo-fi (they didn't spend much money recording their stuff), and I like it a lot. It's very simple and fuckin' good...especially their album Got A Record. I fuckin' love the sound it has, it's perfect for the band, and I also really love the order of the songs. I think the songs are very well-organized, and I can't imagine hearing them in a different order. I can't imagine hearing "Fed Up", "Baby Let Go", or the Lurkers cover "Shadow" after "Heat Seeker". After "Heat Seeker" comes "Rip Your Heart Out" (my favorite Rip Offs song), and then "Fed Up" and more and more... Probably they didn't think a lot about the order of the songs, but I think it is near perfect for the album. If you haven't heard the album, it's '77 punk with a very trashy feeling that comes from garage music. For me, this is garage punk '77 (like Teengenerate, Registrators, and some other bands); for you, I don't know... I'm not very good with the titles of music, but I think you MUST hear it now.

The Rip Offs didn't release lots of stuff, but they did put out some incredible 7"s. I discovered the Rip Offs very late, and I only heard the Rip Off Records singles compilations that contain most of their singles. The best of the singles is "Make up Your Mind"/"Wild Jane"...fuckin' perfect. I also like the songs "Leave You Cold", "Now I Know", "Go Away", and "Hooked On Phonics" a lot...all their stuff is essential.

And I've got nothing more to add. There are other good bands related to the Rip Offs - like Supercharger, the Infections, Zodiac Killers, the Fingers, les Dragueurs, and Four Slicks. Probably there are some more that I can't remember. I especially recommend Supercharger and the Infections. Also check out the label Rip Off that has lots of cool stuff - it's essential stuff if you want to know today's garage punk influences.
Publicado por Mr. Trashe en 13:17

thanks for catching my article!!